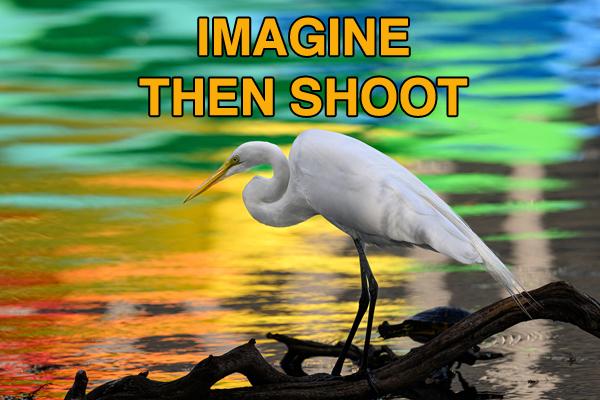 Want Better Pictures? Imagine Them Before You Take Them

(Editor’s Note: You can read ”On the Road” columnist Deborah Sandidge’s other columns here).

It was shortly after I’d completed a remote Zoom presentation to a group of camera-club members that I decided to share some of the images and main points of my talk in this column. I show photographs, explain the process of making them, and answer questions, and at a time when in-person workshops, camera club meetings, and field trips were impossible, doing Zoom sessions was a welcome chance for members of the photo community to stay connected, motivated, and inspired.

The key to my photographs is that most are created in my mind before they’re captured in the camera. I see a scene or subject and think, what can I do to make it special, memorable, personal? Maybe I shoot during the blue hour, or make a long exposure or a close-up, or use an unusual or unexpected composition. To me, a really cool photo is more than just what’s there, and my purpose in the Zoom meetings is to take people a little further up that creative road. Want to go along?

Timing is everything; so is location. © Deborah Sandidge

Anyone can make a photograph of an egret. To make something special, I chose a great location, waited until late in the day for beautiful reflections, and hoped for a bit of luck.

The beautiful reflection is a rainbow-painted band shell at Lake Eola Park in Orlando, FL. I walked around, found a colorful patch of light, and checked for positions and angles so if and when a bird showed up, I’d know exactly where I needed to be to get the most colorful photo.

The camera club folks wanted to know the shutter speed and the lens I used. I’d set 1/4000 because there might be a wing flap, and the lens was my super-nice Nikkor 500mm—not too heavy, a walk-around lens that’s great for bird photography. It was hand-held, and wide open at f/5.6 so the reflections would be in soft focus; too sharp a background would compete with the bird.

Once Upon a Time in Iceland

Vestrahorn’s rugged terrain is obvious. How can we work with that? © Deborah Sandidge

That’s Vestrahorn in the background—it’s gorgeous, and the terrain is so rugged and angular that I suggested to the tour group I was leading that we include a view that was about contrasts. In a long exposure the water would be smooth, with nice reflections, and the moving clouds would blur to softness, giving the image a very tranquil feel that would still accentuate the mountain’s texture.

I used a solid, 15-stop ND filter to hold back the light for a tripod-mounted, cable-released 5.5-minute exposure. Back home, I thought the photo, which was shot in color but was practically monochromatic, would be better if it had an overall cool tone, so I added a cool-blue tone filter effect in post processing.

This had to be hand-held. There are so many different angles happening, I couldn’t be tied to a tripod. © Deborah Sandidge

There’s an amount of luck here, but also a lot of preparation. I’d just gotten a 105mm micro-Nikkor for my Z cameras, and I took it to a nursery where I knew a lot of bees hang out. I started with a location that would favor the shot: a spot where, photographed at f/5.6, the red pentas flowers would form a smooth, out-of-focus background and the pink ones provide a sharp-to-smooth foreground.

I didn’t have much history with super-close-up photos of bees, but I learned quickly to set a 1/2000 shutter speed and crank the ISO to 500. There’s a balance needed here: if the shutter speed isn’t fast enough, the bee will look like it doesn’t have wings; too fast and the wings look frozen. Flying right at me? Sheer luck. He turned suddenly, and I shot like mad.

At the pier in San Francisco I’d hoped for the golden light of a nice sunset and interesting clouds. I got neither. But I knew the pier lights would be coming on, so I made creative composition my mission. With a scrunched-up jacket to cushion the camera, a cable release, and a 24-70mm zoom lens, I set my Z7 for a two-exposure focus shift (aka focus stack) to give me the sharp, front-to-back focus, bench to Transamerica building, that only that technique can render. The settings were one second at f/16 and ISO 125.

I got leading lines, a fill-the-frame perspective, reflections on the wood, and lots of detail in a photo that tells a different, more interesting story of the location than a usual, straightforward composition.

When I thought the best moment was going to be over, it kept getting better. © Deborah Sandidge

A long exposure for this image, taken from Brooklyn Bridge Park, softened the clouds and smoothed the water so the New York City skyline would have no competition for its sparkle and shine. The longer I waited into the blue hour, the more gorgeous the scene became, so I kept working with what the changing light was giving me.

The camera club’s questions included “How long an exposure?” and “What lens did you use?” Two-and-a-half minutes, and a 24-70mm zoom at 29mm. Normally for a cityscape I’d go with a wide-angle, but here the mid-range zoom was perfect because the city was so far away. The group also asked, “Did you have your camera on vibration reduction, or did you turn it off?” It was off, as it should be anytime the camera’s on a tripod.

As I told club members, this is not a set-the-camera-on-auto shot because manually setting the ISO has everything to do with the exposure. A high ISO won’t get you the 2.5-minutes you need for all that light to reach the sensor. The ISO here was 64. I always set a low ISO for photos like these, and here it enabled the long shutter speed, at f/16, to give the scene the depth of field it needed.