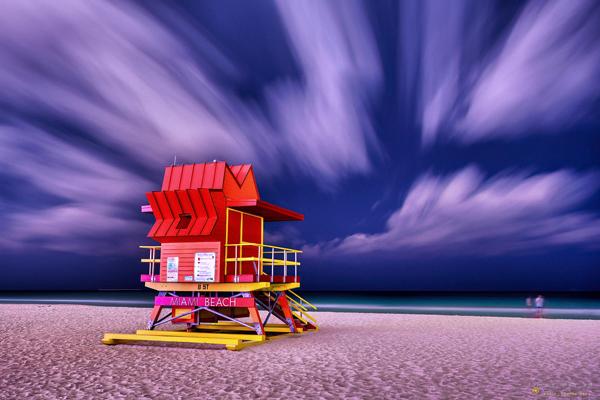 Want Better Photos? Use These Tips, Slow Down & “Control” the Light

A lifeguard station, South Beach, Miami, 9:30pm. It was pitch dark, but a three-minute exposure at ISO 64 and f/5.6 gathered in ambient light from across the street and stretched the clouds across the sky to create an image I couldn’t see—or imagine, really—as I stood at my tripod. © Deborah Sandidge

(Editor’s Note: You can read ”On the Road” columnist Deborah Sandidge’s other columns here).

It’s often a case of hurry up and wait. I’ll hurry to a location—often it’s a beach, while it’s still dark, and with a flashlight to guide me I’ll check out where the rocks and tide are. Then I decide on the location for the camera and select the lens that will best tell the story.

Once the camera is set up on the tripod, I’ll make a series of test shots to determine the best approach. If the clouds seem to be forming up to one side, or the wind is pushing the receding wave a certain way, I’ll change my angle.

I took this at 6:04am; one of a series of photos shot at Coral Cove, Tequesta, FL. You barely see a hint of pink in this 30-second exposure, but it’s there, and it suggested what was to come if I stuck around. I did, and it wasn’t a long wait. © Deborah Sandidge

I’ve always been guided by the idea of capturing the most interesting, compelling light, no matter what time it happens, and I feel that light most often occurs well before sunrise and after sunset. Because the light conditions then are ever changing, I’m often rewarded with unique, beautiful skies when shooting during those hours. Often I may have an idea based on existing conditions or past experience, yet I’m not surprised when totally different options push me in different directions.

Under Control Once you master how to manage or control light, the opportunities are endless. You can, to a reasonable degree, count on the repetition of light patterns and behaviors. When I’m shooting in the Rocky Mountains, for example, I can consistently photograph stars as pinpoints of light, and I know that in the pre-dawn hours the sky will begin to reveal unique colors as it gets brighter, and just maybe some gorgeous clouds will come in to further enhance the image.

Coral Cove at 6:19am. In the 15-minute interval I changed my position and framing for this shot, also taken at 30 seconds, as I saw the clouds forming outside my original composition. As they rushed in they grew thicker, expanded, and changed color with the light. © Deborah Sandidge

It may surprise you that I used the term “control the light.” While I know precisely when the sun will rise and in what direction it will come to illuminate my subject, I also consider how changing light conditions and cloud formations will affect the scene. And I can use the technology of photography to control, even dictate, the look and impact of light on the image.

I’ll adjust ISO, aperture, and shutter speed to create and optimize the image. I’ll always consider how shutter speed, intervals of exposure, and time-lapse techniques affect single images as well as composites built on a series of photographs taken over time.

This is the first shot I took—a 30-second exposure to capture the stars above the Rocky Mountains in Colorado. This is what I saw, and what the camera captured. Then I just kept on shooting. © Deborah Sandidge

Taking Time Essentially, there are three things to know that will control the nature of light and illustrate what happens over time.

First, your camera will see more than you do because the dynamic range of the sensor is greater than that of your eye. Shoot into shadows and you’ll often see more detail in the image than you saw in the scene, especially if the exposure was a long one.

This is a stack of 30-second shots, taken one right after the other and blended at the computer. The amount of time I spend—in this case about an hour’s worth of shooting—is dependent on how many animals I hear growling in the background. Best to shoot images like this when there’s no moon, no light pollution, and a minimum of growling animals. © Deborah Sandidge

Second, it pays to stick around. In other words, spend time at the scene. An image or two of a sunrise isn’t nearly enough, at least not for me.  I want to see what happens next, and then in the next that follows. I’ll give the scene time to develop, maybe even time to surprise me.

Third, you have a lot of photographic options and technology to choose from: lenses and exposure times, depth-of-field, ISO, picture controls, and composition. For many of the photos here the key was as basic as choosing the aperture I needed and then setting as low an ISO as possible so I could slow down the shutter speed.

In the early morning hours on Ocean Drive in Miami Beach the proprietors wet down the streets in front of their restaurants, and that created fascinating reflections as I waited for cars and made long-exposure photographs—this one at 25 seconds. © Deborah Sandidge

I’m tempted to say it’s not rocket science, and it looks like I gave in to temptation. If the picture is about time, it’s also about timing and patience. Slow down, think it through, and try it out. When it works well, you’ll remember what you did!

Social Media Note You can follow Deborah Sandidge and her photography on social media at instagram.com/debsandidge, twitter.com/debsandidge, and facebook.com/debsandidge. Her website, deborahsandidge.com, offers a variety of images as well as photo tips and techniques. In all visits, please take your time.