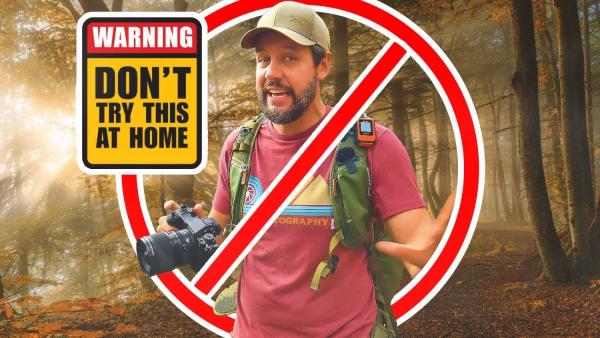 How to Take HORRIBLE Landscape Photos at BORING Locations (Satire)

Here's a humorous, satirical, and surprisingly helpful tutorial that offers you bad photography advice…on purpose. In the video below, pro photographer Mark Denney flips his regular tips and tricks on their head to share the worst things you can do if you're shooting landscapes.

Or, in other words, Denney wants you to do the opposite of what he suggests in the video. If that makes sense.

"In this week’s episode, we discuss how to take horrible landscape photos in boring locations," Denney says. "So, I figured this would be a great way to shake things up a bit rather than focusing on ways to improve one's landscape photography - a bit of a fun video this week! I think we've all be in those scenarios where we visit a local area that feels boring and uninspiring, which is the case for the location I visit in this week's episode."

This "step-by-step guide for destroying one's outdoor photography skillset," is meant in jest but Denney wants you to take these nine bad tips seriously—so seriously that you'll avoid doing them.

"I do want to add a very quick disclaimer," he says, tongue firmly in cheek. "The actions in this video should not be attempted nor replicated at all."

"Studios today spend thousands if not tens of thousands of dollars on lights with one job. Just to make the studio as bright as possible," Denney says. "And it's the same thing with outdoor photography. You need as much as you possible can. So, this idea that you want to shoot in the early morning, golden hour, sunrise, sunset, blue hours. It's a farce."

"There's really only one lens you need. The wide-angle is king. If I could find a one millimenter wide-angle lens, I would get that. The wider the better."

"Camera manufacturers are spending millions on In Body Image Stabilization (IBIS) and the whole purpose is to keep your camera steady. But there's a whole industry out there dedicated to tripods and people continue to spend all this money on tripods. Well folks, ISBIS. Pretty much every modern camera has it."

"I like to look at photography as purely a numbers game. The more images you capture, the better chance you're going to get a keeper. But when you get on location and you see a scene you like, just take the shot real quick. One shot and done. And I'm going to move on to somewhere else."

Bad Tip #6: You're NOT Smarter than the Computer!

"Saving time is critical. Being efficient when you're on location is the utmost importance. So don't sit there and try to figure out the optimal camera settings. No matter how smart you think you are you're not going to be smarter than the computer in your camera. Just use the automated settings."

"Everyone once in a while you find a composition where you need to get a little bit lower, but I often see photographers who are laying on the ground. But if you think about it, ever since the dawn of time, humans, we always have our eyes in one spot and it's right on top of our head. And that's the way we see the world and that's what we're used to seeing. So, the majority of your photographs should be at eye level."