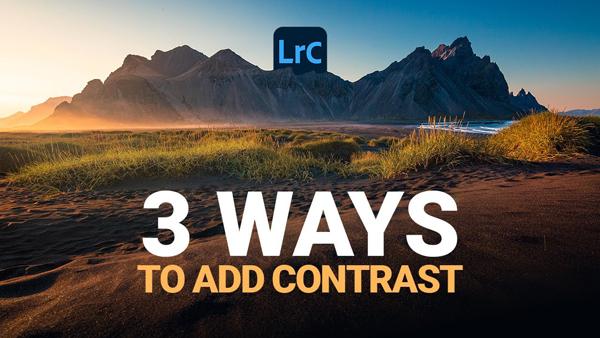 3 Ways to Add Contrast to Travel & Nature Photos in Lightroom for Images that POP!

It’s amazing how a basic tweak in Photoshop or Lightroom can make a huge difference in an image. Sometime all that’s required is a boost in saturation, while other times a bit more sharpness or contrast is what takes.

While Mohrle uses a landscape photo captured in Iceland to walk you through his technique, the tips he provides work equally well for all sorts of outdoor images, from travel and wildlife photos to action sports shots.

As Mohrle explains, “Contrast makes landscape images a lot more appealing by adding depth to a photo.” The methods he describes include exposure adjustments, local enhancements, dehaze, and even HSL adjustments for natural look results.

Before creating this video Mohrle applied some basic editing and color grading to the demonstration image, so he had a good base from which to start. As you can see, the photo is still flat and rather boring—and that's where additional contrast comes to the rescue.

Mohrle’s begins in Lightroom’s Basic panel where he employs the Contrast slider to get started. The trick is to keep your eye on the histogram atop the panel, and make exposure adjustments as needed. This particular shot was slightly underexposed, and Mohrle quickly rectifies that.

Another approach that can be used within the Basic panel involves adjusting highlights, shadows, whites, and blacks, and Mohrle demonstrates how that’s done. As you’ll see, this method provides more control when selective adjustments are required in different parts of a scene.

Mohrle then leaves the basic panel and heads over to the Tone Curve for yet another method for precisely boosting contrast. After achieving the desired effect, all that’s left is some final color grading and the image is complete.

You can more shooting and editing tips on Mohrle’s YouTube channel, so head over there and subscribe after watching this episode. And take a look at another quick tutorial we shared recently, explaining how to make faster and cleaner selections in Photoshop.