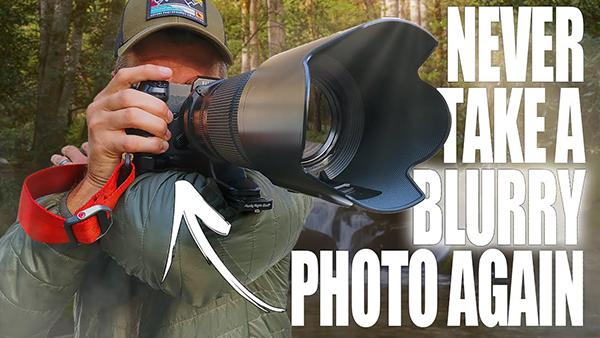 What if there was a way to never take a blurry photo again? While that might not be entirely possible, pro landscape photographer Mark Denney says he knows three things that many photographers do to cause out-of-focus images.

"I just wrapped up a flurry of workshops across the U.S. and one of the most common struggles I heard from the participants was that they often end up with slightly out of focus and blurry photos," Denney says.

"And out of focus photos are one of the few things that cannot be fixed with any photo editing wizardry. So, if you're not careful, this problem can ruin your landscape photos."

In the below video, he reviews the three most common causes of blurry photos he's encountered in his workshops. "Hopefully you can avoid these mistakes the next time you're on-location," Denney adds.

Jump to the 3:05-minute mark of the video below where he starts explaining the three typical errors photographers make that prevent their photos from being sharp.

#1 Camera Strap While Using a Tripod

"I’m not against camera straps at all but when you are shooting a tripod, a camera strap can be your worst enemy, mainly because your camera strap is dangling. Especially if there's a little bit of wind, it can cause a lot of havoc."

"No matter how hard you try or what kind of Ninja stillness you have, there's no way to press the shutter button without introducing a little bit of camera shake in the camera. There's two very easy ways to solve it. The most common way is by using a remote shutter release. What I find to be an even better solution is a self-timer."

#3 Handholding Too Slow of a Shutter Speed

"This is hands-down, the most common reason why a lot of photographs are not as sharp as people would like them to be. It's because you are using a shutter speed that is too slow if you're handholding your image. "